I didn’t really know what to expect from the musical Cabaret playing at Sunderland Empire.
I was aware that it was set in 1931; a time of decadence and rise of Nazism in Germany, plus I knew a couple of songs. Right from the start, The ‘Emcee’ who runs the ‘Kit Kat’ Club in Berlin attracts your attention with his costume and humour. The dancers also wore ‘interesting’ costumes which allowed them to perform quite stunning leaps during their routines. Luckily, they kept their clothes on for these; yes, there is some nudity in the show but it’s not distracting. The songs were good and well performed by but the vocalists and the orchestra. The basic story is concerned with the showgirl Sally Bowles’ career and love life. This, I thought this story line was too predictable and became a bit tedious for me. The background story of Nazism and their effect on others was more interesting. So, basically I was having a pleasant time until the shocking final scene; naked people in concentration camp showers. I could feel tears welling up in my eyes. A musical I won’t forget! 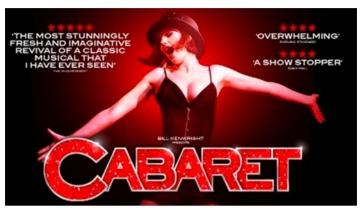 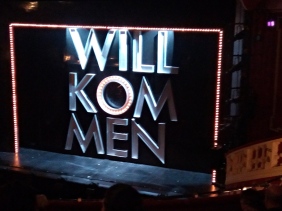 I remember during the mid 1960s listening to Simon and Garfunkel hits on the radio so, last night I went to see the tribute act ‘The Simon and Garfunkel Story’ at Whitey Bay playhouse. A large screen was used to project newsreels and montages from the 60s and 70s; the two man decades of their work, which I found interesting and enjoyed, except for a section where unknown people were talking about things that didn’t seem to relate to the story. The performers also add their own narrative to the story in between a variety of songs in chronological order. The timing of their harmonies was excellent though I thought ‘Garfunkel’s’ voice has too much of a nasal quality at the high notes. The music ranged from mainly acoustic in the first half to electric in the second and was well accomplished. I enjoyed hearing the performance of the big hits such as ‘Sounds of Silence’, ‘I am a Rock’, ‘Cecilia’, ‘Homeward Bound’ etc.. and these brought back the memory of why I wasn’t always impressed by their music, as I thought that their albums didn’t contain enough quality songs. Some of these they performed. Their encore was ‘Bridge over Troubled Water’ which although a great song and I appreciate it is difficult to sing, was performed terribly by ‘Garfunkel’; too many flat notes for me! Overall, I think The Simon and Garfunkel Story is really a show for die- hard fans of the music. 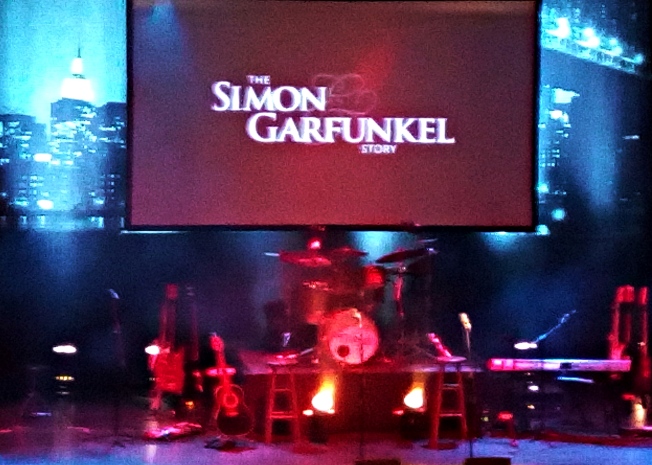 As a fan of the ‘Carry on’ films I thought I’d go a see this comedy at the Whitley Bay Playhouse.
The previous reviews seemed to indicate to me that it might be along similar lines.
The story line is concerned with three elderly female married cleaners and a middle- aged single male vindictive supervisor who lives at home with his mother. Due to their company’s efficiency drive the cleaners are required to re-apply for their jobs, but they supervisor wants them to be made redundant. He verbally abuses them constantly as a way of driving them out. Yes, we’ve all encountered or worked for people like that during our own working lives, and I’m so….. glad I’m retired, so I don’t have to tolerate them anymore. The ladies have other ideas, such as running a sex chat line. I thought the premise of the play was a good fun idea and could be entertaining to watch. The audience was composed of 90% women between approximately the ages of 30 and 70 years. Once the play started, it became more like a Hen’s night out with screeching, shrieking from the audience responding to poor jokes and innuendos which were so far sign-posted they lost their punch. At times, some of the audience were in hysterics at the stage antics and dialogue, but from me, not even a titter! At times, I was so bored I started to feel sleepy and couldn’t wait until the end (well, I did have to see if it improved during the ‘whole’ performance). It didn’t for me, but for ladies who enjoy a good Hen night, this is for you. 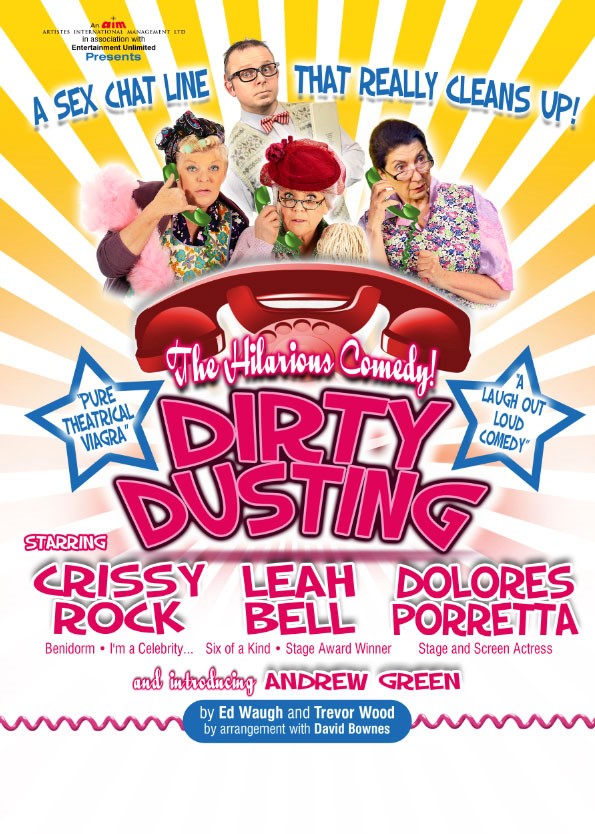 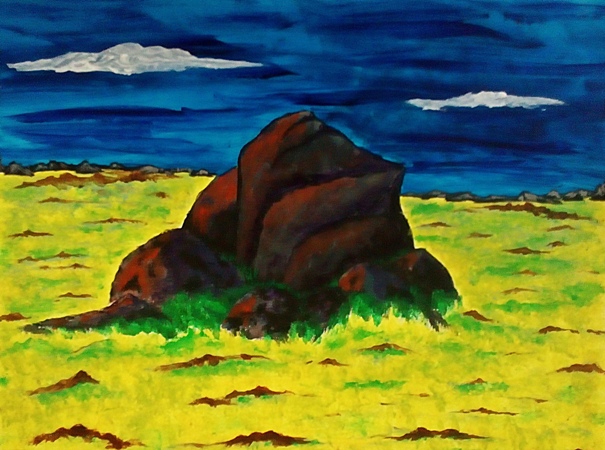 Acrylic paint on acrylic paper painting depicting a rocky outcrop and a scattering of smaller rocks  situated in a yellowing meadow surrounded by a distant mountain range under a deep blue sky, 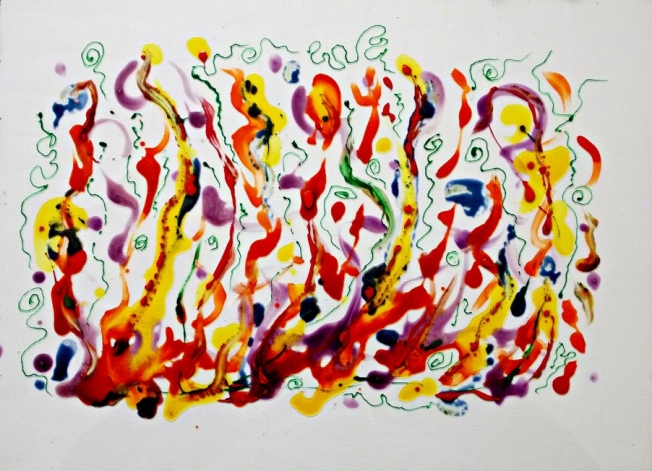 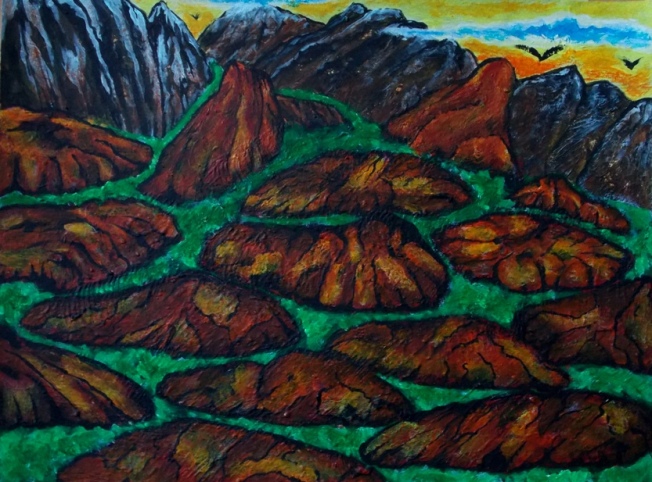 Acrylic on painting on acrylic paper depicting a green valley between high snow capped peaks housing rocks which the local people regard as sacred to due their Tortoise Shell colouration. 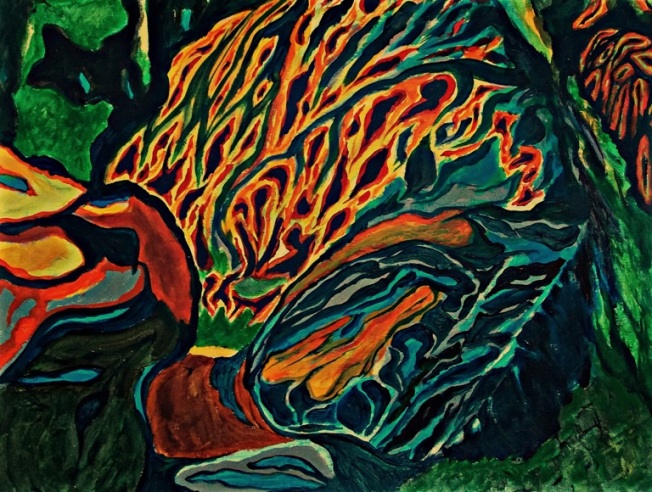 Acrylic paint on acrylic paper painting representing rocks residing in the land close to the fissure emitting hot, molten volcanic lava oozing and sliding over them.

Back to work
all fresh and anew.
Back to the race
of rats and ruin,
of love and hate,
grime and greed,
tension and stress,
psychological torture.